Virat Kohli,the biggest sensation of world cricket has a different story altogether.There were times when he had to sit down on the bench and think how to improve himself as a player and also as a person. Even when things didnot go well, he didnot give up and kept on working hard .From his game to fitness to himself,he has improved in every aspects of life.He owes it to his lady luck,his wife Anushka sharma who as per him has changed his whole life.Here are some of his life changing moments and success mantra.

TOPICS I HAVE COVERED:

1.HIS INITIAL STAGES OF LIFE.
2.HIS HARDWORK.
3.TRAGEDY DURING RANJI MATCH.
4.BECOMING THE NUMBER ONE PLAYER IN THE WORLD.
5.HIS FITNESS MANTRA.
6. SELFLESS CRICKETER.
7.THE EXAMPLE HE IS FOR OTHERS. 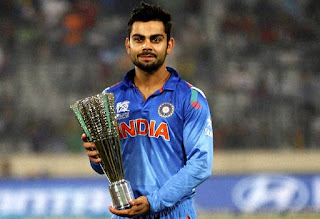 (ONE OF 7)
HIS INITIAL STAGES OF LIFE.
Born on 5th november,1988,being the youngest sibling,Virat was naughty as well a fun loving child.He was also good in studies as stated by her mother.He used to play cricket from the age of 3.Looking at his love for the game,his father joined him the WEST DELHI CRICKET ACADEMY where Virat was one of the first player to join.His coach MR.RAJKUMAR SHARMA has worked really hard to help him grow as a cricketer and also as a better person.He played his under-14 and 16 from his academy itself.
(TWO OF 7)
HIS HARDWORK
With his hardwork and dedication,with constant runs at the under-17 level,Virat booked his place in the India under-19 team for the Under-19 World Cup 2008.His good form didnot end there, he helped his team lift the World Cup and made the whole nation proud. In the very year he booked his place in the National side for the series against Sri Lanka and scored his debut fifty in the fourth match. Virat had learnt from his mistakes and he knew if he had to cement his place in the National side he has to work really hard.So with this thought he first started to maintain his fitness and continued to spend more time in the gym and became the fittest player in the team.He gave up all the food that harmed his body and fitness. He also rejected many sponsors and ads from different food brands by saying if he never consumeD those, he won’t ask his fans to consume it. He followed a proper diet and was a big fan of Cristiano Ronaldo’s fitness. Now he is the fittest player in the world.
(THREE OF 7)

During a Ranji Trophy match, Delhi was following on and Virat was batting along with Punit Bisht. At the end of the day, there was another end in Virat’s life. His father left for heavenly abode. But Virat didnot end there. He came to bat the next day and went on to lead his team to victory by smashing a century along with Punit. When asked what made him go and play, he replied”MY DAD TOLD ME TO NEVER LET ANYTHING STOP YOU FROM YOUR GOAL”.
(FOUR OF 7)
BECOMING THE NUMBER ONE PLAYER IN THE WORLD.
The 2011,tour of England was a disaster for Virat. He could not prove and cement his place in the team and was out of form. Criticism kept on haunting him but he had some other plans and goals. People kept on blaming Anushka for his form but deep down Virat knew she was the one who kept him motivated. Then Australia happened in 2014 and he ended up scoring big runs for his team and was praised by each and every Australian player. He ended up with 629 runs in 4 matches hammering Johnson all over the park who in the end apologised for sledging Virat. From there his runs never took a break. The only reason why he is called “THE RUN MACHINE”. 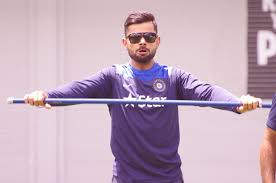 Virat has a seperate diet plan from day to night, ignoring every food that harms his body. He has a seperate water for his fitness. Being a big fan of Cristiano, he follows and maintains the adequate diet and proper workout. Starting with palak soup and salad  he goes on to eating bread and peanut butter while he goes from the hotel to practice sessions. He strongly believes that if a person is fit to play, nothing can stop him from scoring big runs at the international level where fitness has to be a very important factor for every player. KOHLI enriches himself with protein rich foods and also low carbohydrates. He has 3 egg bite,one whole egg and also spinach black pepper cheese. He consumes papaya too. When his trainer asks him to put on some muscles, he increases red meat and has some sea food at night. On an off day or a week he has four hours of gym session divided into two halves where he puts more effort on cardio. He has a big gym in his home itself where he has his sessions done.

(SIX OF 7)
SELFLESS CRICKETER.
Virat Kohli has joined hands with the SMILE FOUNDATIONto help the underpriviledged children  in their growth and development.Virat Kohli organises a FOOTBALL MATCH every year along with the bollywood stars to help in raising funds for his charity organisation.Being a slefless cricketer Virat has helped many children in their development and growth.Even though many times we have seen him in the presentaion ceremony where he donates his man of the match award to the needy ones.Virat was always termed as an arrogant player but now with his big gestures,he is termed as a SELFLESS CRICKETER.

(SEVEN OF 7)
THE EXAMPLE HE IS FOR OTHERS.
VIRAT, a player who is now an example for millions because of his game and fitness too.He has set some new fitness goals for teenagers and also showed them that fitness is the key to playing longer and better.Today every teen who persues any sport admires Virat Kohli as his fitness icon.Be it any sport,everyone wants a fit body like him and that makes him set example for others. 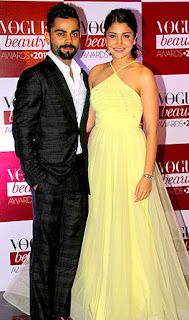 MOTIVATION YOU CAN GET FROM HIM:

VIRAT IS A PROLIFIC INDIAN BATSMAN.THE DOWNFALL AND HARDSHIPS HE HAS FACED HAS ALWAYS LED HIM TO VICTORY IN THE END.THE RISE OF THE FALLEN CLEARLY STATES: GIVING UP IS NOT ALWAYS A SOLUTION RATHER IF WE KEEP ON WORKING HARDER WE CAN MAKE IT IN THE END.REMEMBER ALL YOUR HARDWORK WILL PAY OFF ONE DAY AND FOR THAT YOU NEED TO BE FIT AND ALWAYS READY TO DELIVER YOUR BEST .THIS WORLD ALWAYS GIVES IMPORTANCE TO THE RISING SUN SO NEVER LET YOURSELF SETTLE DOWN AFTER A VICTORY.

From tourism company to cab services- The rise of Ola cabs

DailyIdeas is your news, entertainment, music fashion website. We provide you with the latest breaking news and videos straight from the entertainment industry.
Contact us: Dailyideass@gmail.com

How to be successful and Overcome a setback- motivational quotes for...

Make Intros and Outros for Youtube- Video in text